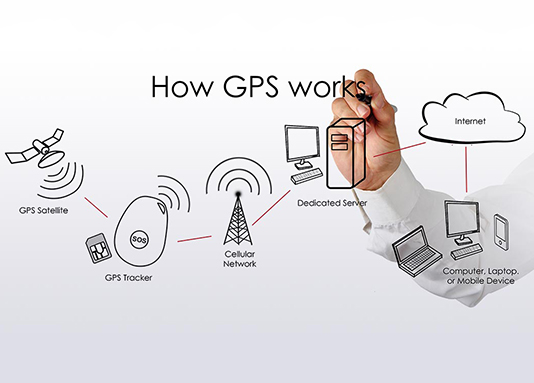 How does the GPS work ?

The GPS (Global Positioning System) or NAVSTAR-GPS1 is a system global navigation satellite system (GNSS) that allows to establish worldwide, an object, person, vehicle or ship position, with an accuracy even of centimeters (if you use diferential GPS), even though the normal is of a few centimeters of accuracy. Its invention it is attributed to french and belgian goverments, but the system itself, was developed, installed and currently operated by US Defense Department.

The GPS works through a 32 satellites network (28 operatives and 4 back up ones) in orbit over the globe, to 20 200 km, with synchronized trajectories to cover the whole Earth surface. When position is established, the reciever used for it, automatically locates with a minimum of three satellites from the network, from which recieves a signal indicating the identification and the time from the clock of each one of them. Based on this signals, the device syncrhonize the GPS clock anc calculates the time from the signals that it takes to reach to the device, and this way it measures the distance to the satellite through "triangulation" (conversely trilateration method), which is based into define distance from each satellite with respect to the measure point. Once distances are known, it is easily defined the relative position itself with respect to the three satellites. In addition, knowing the coordinates or position from each one of them by the signal they send, you obtain the absolut positon or real coordinates of the measure point. It is also established the extreme accuracy in the GPS clock, similar to the atomic clocks that are aboard in each one of the satellites.